Donald Trump,POTUS ,the man seems to be in great hurry to garner more attention despite all the attention tsunami which he is flooded with due to his title of USA.

Some kids are born with the overdose of attention ,being right in every possibility of their imagination. This kid is just a 73 years old man.

Kid bullies when he gets attention to put his opposition down. He bullies left when they are right, bullies right when he is wrong.

He just feeds on attention from across the globe. He has only one challenger from the other side of the earth. His ISO 9001 certified Friend Modi.

Modi is the man who knows exactly what his brother Trump is upto . They both fit into each others arms to give mere mortals hollywood emotions of perfect Hug buddies. 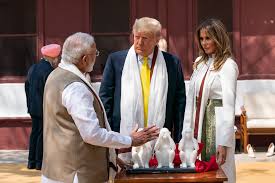 Chinese Pandas have requested some coaching classes to improve their hug performance. But both guys are too similar in their apporach of dealing with ‘other’ buddies and questioning teachers .

They are into an alliance of mutual back scratches. Indian showcases Trump’s friendship as Jai power of India sharing diases with the mightiest Veeru of World.

Indigenous species are hashished by such visuals assuming India is just there on the cusp of american supremacy.

American gives nothing except for good words of friendship,love ,camardarie and social media appreciation.He uses his best friend popularity and his country’s population as a platform.

These hugs and friendship love helps Trump in LOOKING democratic in photos for the democratic americans. Thereby It makes him acceptable man across the world as the American leader in eyes of White Americans .

This thereby helps him pitch for some decider votes from Indian americans,just in case they are needed.

Good times for the septuagenarian Wonders. Long will live Great America to make India a Vishwaguru.

Donald Trump is best when he knows he is the best.

Hence, Welcome Donald Trump to your buddy’s land of India.