Thisi s a fact that Chetan Bhagat is the most-read English writer in India. Although Chetan Bhagat books list is hardly in early 2 digits, his fans are innumerable  (and his haters too). All of his books have received a great response including Chetan Bhagat’s latest novel – The Girl in Room 105.

And a majority of the books from the bestselling Chetan Bhagat books list have been made into Bollywood movies. Due to such acceptance in the Bollywood, many of the critics have started calling him a film-centric author.

In this article, we have compiled the complete list of books written by Chetan Bhagat, both fiction as well as non-fiction. You will get the details of all the books including the latest novels by Chetan Bhagat. Not only that, this list of Chetan Bhagat books also features the synopsis and reviews of each book and where to buy them.

But before that here is a brief introduction of the bestselling author, Chetan Bhagat. Just for those who don’t know him as a person and the man behind all the novels and eventually the hit Hindi movies.

Chetan Bhagat is the most selling English-language novelist in India’s history. Time magazine named him amongst the ‘100 most influential people in the world’. The Fast Company, USA, also listed him as one of the world’s ‘100 most creative people in business’.

Chetan Bhagat married Anusha his classmate from IIM-A. Now, he lives in Mumbai with his wife and his twin boys, Shyam and Ishaan. He also writes columns on Youth, Career, and Social issues in major English & Hindi newspapers.

To know more about Chetan bhagat net worth ,life,and other interesting facts, please read the article

This list of books written by Chetan Bhagat comprises all the 10 novels (fiction and non-fiction). All the novels by Chetan have stupendously remained in the bestselling list since their release.

Chetan Bhagat started his writing career a decade and a half ago in 2004 with his first novel Five Point Someone,Five Point Someone is a story about three friends – Hari, Ryan & Alok–  and their life at the top engineering college – IIT. The story has funny and memorable moments with a tight edited theme of satire on the education system and how students survive in the competitive environment.

The thing which made Five Point Someone special is that the much-loved Hindi film 3 Idiots starring Amir Khan was based on this novel by Chetan Bhagat. The release of this movie made Chetan Bhagat a star author overnight.

2. One Night @ The Call Center 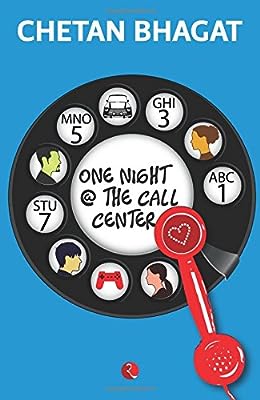 With the huge success of Five Point Someone, Chetan Bhagat released his second novel – One Night @ The Call Center. It was published in 2005. The story was around the sheer thought of a call from God himself to imbibe the self-belief and determination. One Night @ The Call Center, the second one in the Chetan Bhagat book list, is a story of six people. The two boys, three girls, and a middle-aged man – working in a call center in Gurgaon and dealing ,struggling with their own problems in life.

After a car crash involving all six characters, they directly receive this call from God who guides and motivates them not only to get out the car safe but face life problems with determination and ultimately win at life.

3. The Three Mistakes of My Life

Chetan Bhagat wrote this third book again about youngsters and how an individual’s dream can overcome the nightmare thrown up by life. The story is about Govind and two friends – Omi & Ali. This book by Chetan Bhagat shows how Govind makes few mistakes that overturn his life into something he hasn’t thought of.

With all his 3 earlier novels being bestsellers, Chetan Bhagat already got national and international fame. His fourth book, 2 States,  which is partly autobiographical was released in 2009. The fourth book on the Chetan Bhagat books list tells the story of a couple from two different states with different culture . The couple had a hard time convincing their parent and getting married. This book makes an satire on the Indian marriage and caste culture.

2 States by Chetan Bhagat can also be considered as the first romance-themed novel in the Chetan Bhagat books list. Chetan narrates unforgettable romantic moments and some witty situations among parents. 2 States was later made into a Bollywood film that grossed more than 100 crores on box office.

After four bestselling novels in Chetan Bhagat books list, he wrote his fifth book, Revolution 2020 and again took on a serious issue of rampant corruption in the Indian education system. The story of Revolution 2020 is about three childhood buddies – Gopal, Raghav & Aarti –  living in Varanasi, India. Gopal is not so well-off and aims to earn money while Raghav is rich and aims to revolutionize India.

There is a parallel love story that both the guys love the same girl Aarti. Towards the end, Raghav becomes MLA and marries Aarti while Gopal sets up his business, still heartbroken for the sacrifice of Love.

After five bestselling fiction novels, Chetan Bhagat was already a established,famous,celebrity author and the motivational speaker delivering lectures at various events. His fifth book, What Young India Wants, is all about his thoughts on the desires of Indian youth and the issues faced by youngsters in the country.

Chetan explains, in simple words, how our parenting, education system and society has an impact on the upbringing of a child and his future. He also talks about our political responsibilities and can we make a difference. He also offers solutions to such problems and urges readers to make the country better.

Half Girlfriend by Chetan Bhagat published in 2014 is one of the latest addition to the Chetan Bhagat books list. After the huge success of the 2 States, Chetan wrote this adult romance novel about a boy, Madhav, who couldn’t speak English and enrolls in St. Stephens College. He wants to be friends with Riya, a modern Delhi girl and doesn’t want to be in relation with Madhav.

Chetan termed this confusing relationship status of being with each other but not being able to decide whether they are in a relationship or not. Perhaps, that’s what most men in India get.

After the phenomenal success of his first non-fiction book, What Young India Wants, Chetan Bhagat wrote another non-fiction book. This book hasessays and columns in which Chetan Bhagat focuses on the solutions to many persisting problems like unemployment, corruption, poverty, communal violence, illiteracy and more. Making India Awesome by Chetan Bhagat was released in 2015.

With easily understandable language, the second non-fiction book on Chetan Bhagat books list gives valuable insights and practical solutions on how every individual can play their part in solving the national problems.

Next novel by Chetan Bhagat – One Indian Girl which released in October 2017. In his latest book, Chetan Bhagat tried to highlight the issue of Feminism and inequality for women in Urban India. It is about difference how a male with the same lifestyle and choices are accepted by society while a female doesn’t. One India Girl is the 9th novel by Chetan Bhagat in which tried to write in the first person with a female perspective. And it is worth reading Chetan writing in a female’s voice.

One Indian Girl by Chetan Bhagat is a story of a girl named Radhika Mehta, an intelligent and successful lady who works at a top Investment Bank. The novel takes a deep look at the problems faced by any employed Indian women in all walks of life, be it work, society or love. Not only she earns a lot of money but also has an opinion on everything happening around her.

The 10th book of chetan bhagat– The Girl in Room 105 –was released in October 2018. The celebrity author narrated yet another love story which he rather refers to as ‘An Unlove Story’. This time the lead characters are from different religions; Keshav is a Hindu boy while Zara is a Muslim girl from Kashmir. And due to that, they have to break up after a happy relationship.

Zara moves on while Keshav is stuck hating everything including his job. After years, one night, Zara asks Keshav to come to her hostel room 105 where they used to meet usually. And the story takes a whole different turn towards thrilling events.

Chetan has wisely weaved the current scenarios of Indian political take on the Kashmir valley as the background which brings a freshness to the story. Just like his previous books. This novel succeeds in highlighting a social issue of our country with the help of an interesting storyline.

The latest book by Chetan Bhagat in the non-fiction category is India Positive. The book is a compilation of new essays and selected columns and hit tweets of the author talking about the burning issues of the nation.

Chetan Bhagat claimed that this book will help people in forming a positive opinion about India. Issues like, unemployment, higher education, inflation and other recent burning issues which the country has faced like Pulwama attack is included in the book.

One Arranged Murder’ is a murder mystery by chetan Bhagat.The book is a story of two best friends who have a detective agency. Keshav and Saurabh live together, work together and are close, despite their differences. Saurabh is to marry Prerna, and though it’s an arranged marriage they seem very much in love. Even though they’re just engaged she fasts for him on Karva Chauth and insists on meeting him on the terrace so that she can eat.

But once Saurabh reaches the terrace to find her murdered. He wants to find the killer so he and Keshav investigate the case together. Prerna lived in a big house in Delhi and there are a lot of suspects.

Bestselling author Chetan Bhagat on Thursday released the trailer of his upcoming book “400 Days”. The book, published by Westland, is the third story from the Keshav-Saurabh series after “The Girl in Room 105” and “One Arranged Murder”. It will be released on October 8.

Bhagat narrating the plot himself about a missing girl Siya and her mother Alia Arora’s determination to find the young girl and seeking help for the same from Keshav Rajpurohit.

“I feel ‘400 Days’ is my best book ever, maybe because I wrote it with full focus as we were all in a lockdown. In ‘400 Days’ I’ve tried to explore themes of a missing child, dangers of the internet and infidelity,” Bhagat had said during the launch of the book cover on Tuesday.

Which is the best selling book of Chetan Bhagat?

Following are the best selling books by Chetan Bhagat – Five Point Someone, The Three Mistakes Of My Life, Half Girlfriend and 2 States.

Which is the first novel of Chetan Bhagat?

Five Point Someone is the first written by Chetan Bhagat in 2004.

Which is Chetan Bhagat’s next book?

Chetan Bhagat’s next book is yet be announced, but he has already completed the manuscript and shared about the same on his Instagram handle.

This was our summary of list of books written by Chetan Bhagat. But Chetan is going to keep coming up with different books,novels,fiction non fiction on regular intervals .Going by his strategic planning about writing books with so much consistency can itself be a case study for any b schools competition. Chetan will continue entertaining his readers in India and abroad. No matter what critics and his haters say about him, Chetan Bhagat has made a mark in Indian Publishing Industry.

So at the end Chetan Bhagat books list is going to be updated regularly with the latest novels by Chetan Bhagat.

Different types of insurance in USA

This website (https://nationalinfo.in/) is not related to any government body directly or indirectly in India or other country. We do not claim to be any government body. We are a information sharing private platform .Read our Disclaimer for more info